Vision Board... or Prayer Board? 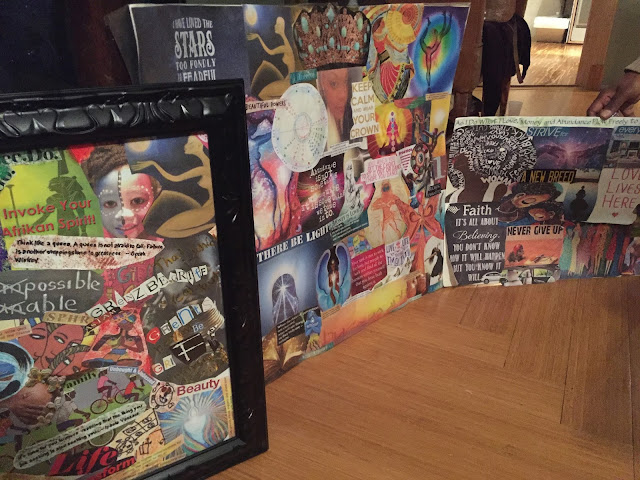 Every Winter Solstice, I gather with the women of the Kamaria Circle to explore the depths of Yin before the return of the Yang.  In our contemporary 'red tent' we honor the many gifts of the Sacred Feminine:  stillness, receptivity, intuition.  And one of the major projects of that evening is getting started on our Prayer Boards for the new year.

A Prayer Board is very similar to a vision board, and both are very powerful tools for manifestation. As we discovered as we shared stories around the circle, both work!  But there are some key differences that make Prayer Boards unique:

1) Intention
Vision boards are  focused on what you want to achieve or acquire (i.e. a promotion at work, vacation abroad,  car, etc.) It is best created when you can clearly see what you want- hence the name 'Vision Board'!  A Prayer Board focuses on who you want to become and what you want to feel. So rather than envisioning a promotion, you might include symbols that remind you to stand in your power and stand up for your worth.  Instead of a hot vacay destination, your board might tap into the feelings of relaxation, serenity, or even adventure.  The point is the why, not the what.

2) Openness
A Vision Board is clear and specific- its purpose is to keep you focused and moving toward your stated goals.  A Prayer Board holds the feeling of your intention, but is open to many of ways of it manifesting.  Its like saying "this or something better" at the end of a prayer: it keeps us from limiting our expectations to what we already know to be possible.  A Prayer Board allows space for the expansiveness of the Universe to flood us with insight, solutions, and opportunities beyond what we might have imagined.  We surrender what we think we might want for our lives to receive the abundance that is already effortlessly flowing our way. 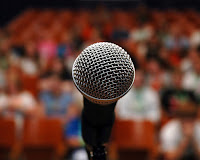 For example, one of my goals this year is to increase my public speaking engagements.   Instead of putting the names of specific places I'd like to present, I am putting a microphone so that I can attract the right opportunities.  I might end up somewhere I'd never have thought to explore, and I'm open to the right workings of a Universe that has never steered me wrong.  An added bonus is that the symbol reminds me to 'speak my truth'- which will serve me not only in my career, but in all of my
relationships.


3) Language
A Vision Board often has affirmations and words that act as reminders of what to do or how to act.  It is a message to your will, to influence your conscious actions and beliefs.  Prayer Boards use language as reminders from your highest self to your subconscious beliefs.   Poems, prayers and passages from Sacred Texts work nicely amid the symbolic images of a prayer board.

Last year, I worked with the simple prayer, "Let there be Light"- equally inspired by Genesis 1:3 and the song by Nas.  It was my prayer to bring healing to my estranged relationships, to illuminate my shadowy parts, and to bring insight during times of uncertainty.

4) Images
A Vision Board has images of what you specifically want to manifest-  another person could most likely look at your Vision Board and pretty much know what your working on.
A Prayer Board 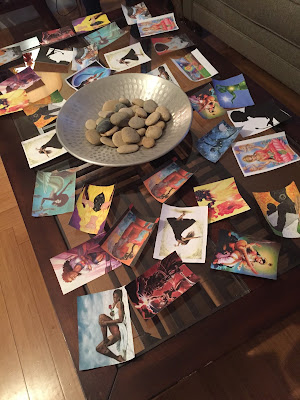 has images that are highly symbolic, personal, and archetypal.  It looks and feels like a dream. Images of actual people are replaced with artistic or silhouetted forms.  Symbols of nature appear as metaphors for the qualities we want to embody.  Goddesses, Orisha, and astrological symbols remind us of who we are becoming: the adventurer, the nurturer, the healer, the lover, the warrior.

5) Intuition & Felt Sense
Both Vision and Prayer Board- making are highly creative, intuitive processes.   Prayer Boards also rely on inner sensing- an inner click, feeling or sensation that we get when something is right for us, even when we don't consciously know why.   (Its very similar to the sense we get when something is wrong or off, that we can't put a finger on, but in the opposite direction!).  This means that while you're making a Prayer Board, there might be images or symbols that deeply resonate with you, but  you can't articulate why in a coherent way. They just feel right, and something in your body "leans in".

Case in point:  last solstice, I kept being drawn to yoga and chakra images.  I had no idea why, especially since my yoga practice over the past few years had been spotty at best.  But there I was, attracted to image after image.  A vinyasa sun salutation found its way at the bottom of my board.   A wild chakra lady covered the right corner.  And 6 months later, beyond all logic and reason, I found myself on a plane to Costa Rica for a 3 week intensive yoga teacher training.  It was not something I had ever intended to do, but the doors opened so effortlessly that I couldn't help but walk through.  And it was one of the most healing and transformative experiences of my life.

Thats the beauty of Prayer Boards- they sometimes only 'make sense' in retrospect.  I am staring at my new Prayer Board now, finding new connections and correspondences that I didn't even recognize before.